The other day I posted about my attempt to make the smallest origami sonobe cube I possibly could, and I promised to follow up and see if anyone had made one smaller than my 1cm one.

My Google-Fu is not strong, but I found this page on Origami-Instructions.com where their users have submitted the smallest cubes they’ve made.  It starts off with a 2cm cube, which made me excited because mine was smaller than that!  It progresses though, and gets down to 4mm!  That’s insanely small.

Note: the page does display a very dodgy looking 3mm entry, but I have to agree with the comments that it looks fake.

I also found this page, on RecordHolders.org which lists a whole bunch of origami related world records.  There isn’t actually an entry for the smallest cube, but there are some other entries that made my brain hurt just thinking about.

For instance, the “Model Folded From Smallest Square”.  0.36×0.3 mm.  MILLIMETERS!!!  Apparently the guy – a watchmaker in Spain – used a 20x magnifier, and the result was about the size of a full stop.  Jeeeeeezzz.

As I said, my Google-Fu is not strong, but I tried finding pictures of the origami piece and all I really found was other sites listing origami records, who used almost an identical paragraph as RecordHolders.org like this one, which also included a photo.

(Semi-Google-Fu skills found no other instance of this photograph online.  That is the exact image size from BritishOrigami.info – I didn’t make it tiny.)  It’s supposed to be a bow tie, but all I see is a square.

I also found a response on a question/answer website which mentioned the photo and didn’t show it, then linked back to the RecordHolders website (which also didn’t have the photo).

As for my best friend Cayden – mentioned in lots of my posts, and in the last one I’m following up on – he isn’t 100% sure but he thinks his smallest cube was made with 1″ paper, which beats me.

He has provided me with a picture he had of some very pretty cubes, but it’s an old image and not taken to prove size so doesn’t have any reference really.  Still – pretty and awesome. 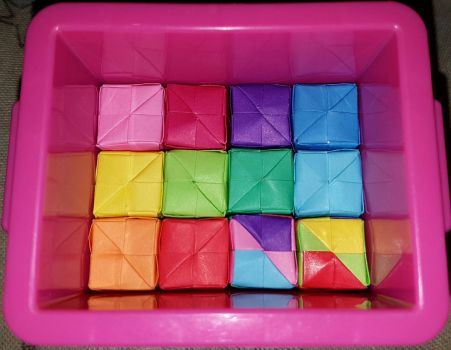 He followed up the next day with two pictures.  The first was this one, with a 13mm cube – I still win. 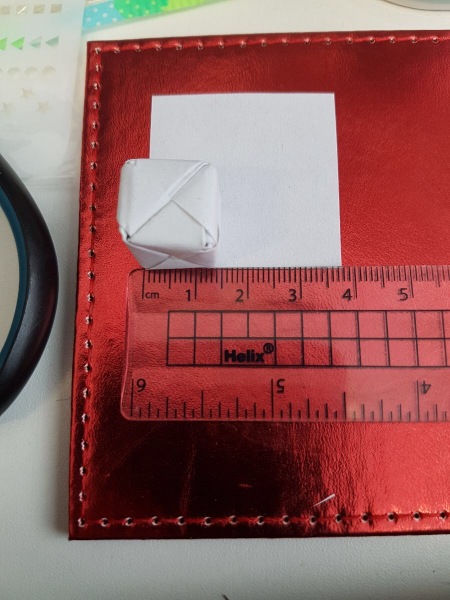 And then he sent this one… 8mm.  Cayden wins.

Update: the next morning Cayden sent me this one. 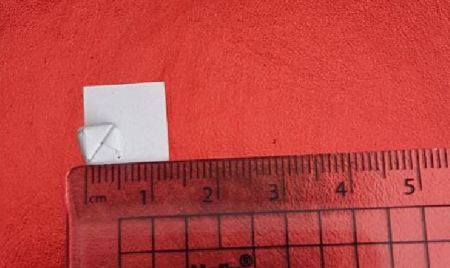