Disclaimer: This post is a repost from my old blog, which was more personal and less crafty. I don’t use that blog anymore, but thought I’d share some of the craft-related posts from there. This one was from March 2015.

I’ve decided I’m going back to basics with beading.  I still have to learn the various stitches to make proper beadwork pictures and things.  Starting with Peyote stitch.

According to this website I’ve been learning from, the term comes from Native American cultures.  There are three types to learn on that page.  Flat Even Count, Flat Odd Count and Circular Flat.  So I started at the beginning.

Made a stop bead.  Easy.

And the instructions for figuring out Flat Even Count were pretty simple.  I got that quite quickly.  As you can see with my yarn and pony beads version: 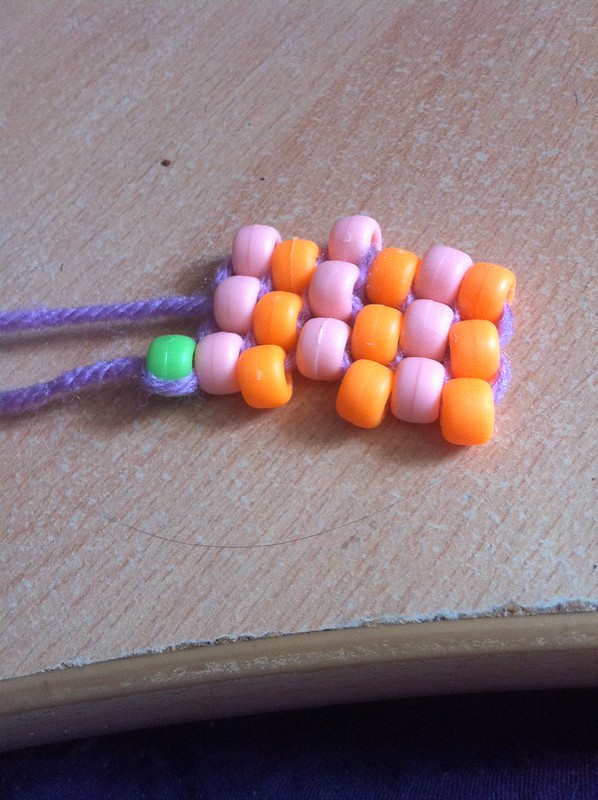 What I couldn’t figure out from the instructions on that site was the finishing off. So I went to YouTube. (I love YouTube.) At which point I realised that it was essentially a case of weaving in the thread until it was secure.

So, Flat Even mastered. To move on to Flat Odd, or to make something in Flat Even?

I went for making something in Flat Even – I decided a nice cuff in purples would be good. So off I went. I realised with a bit of a “duh” moment that it’s called Flat EVEN because the number of beads in your initial row is an even number.

I also realised whilst working that it’s better to pull your thread taut after every bead, or every few beads, rather than at the end of a row. Especially if you’re doing a long row. The thread won’t pull through otherwise.

And once I’d finished my few rows, I realised that when weaving your thread through to secure it, you shouldn’t pull too tight because it’ll warp the shape of your piece.

I DID have a nice straight line to make a cuff. Now I have a wave. 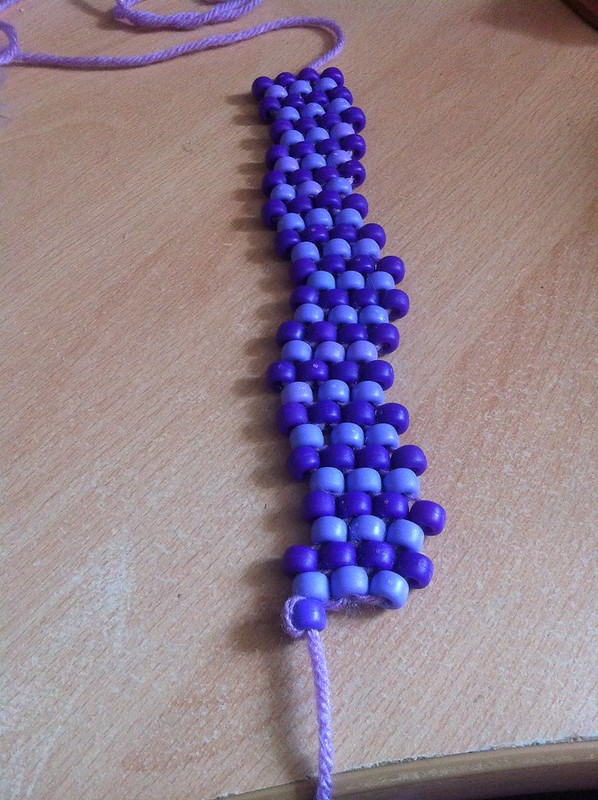 Oh well, that’s what learning is all about 🙂

Next question – do I work on improving my Flat Even skills, including learning to follow a pattern, or do I move on?

Well, I think that question is fairly obvious.  I needed to follow a pattern.  A quick google search lead me to this website, which had a nice diagonally striped pattern to do. 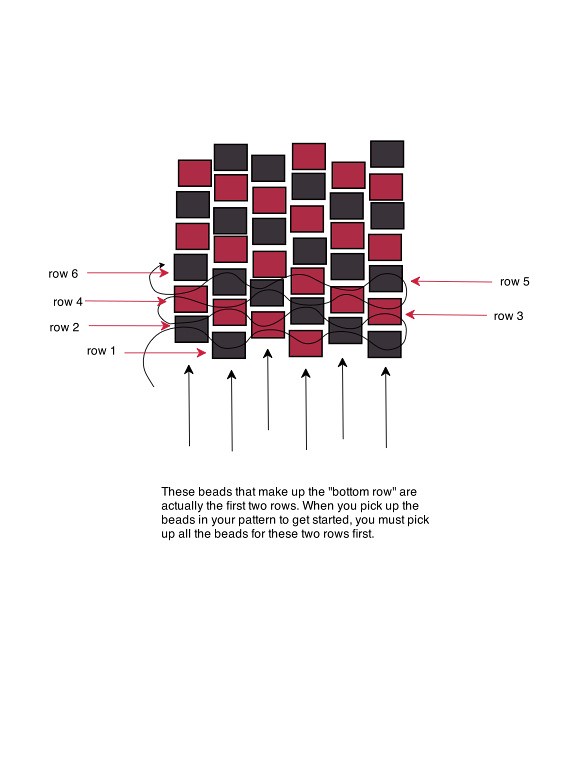 I figured out the pattern reading quite quickly, but I wasn’t entirely happy with my results. 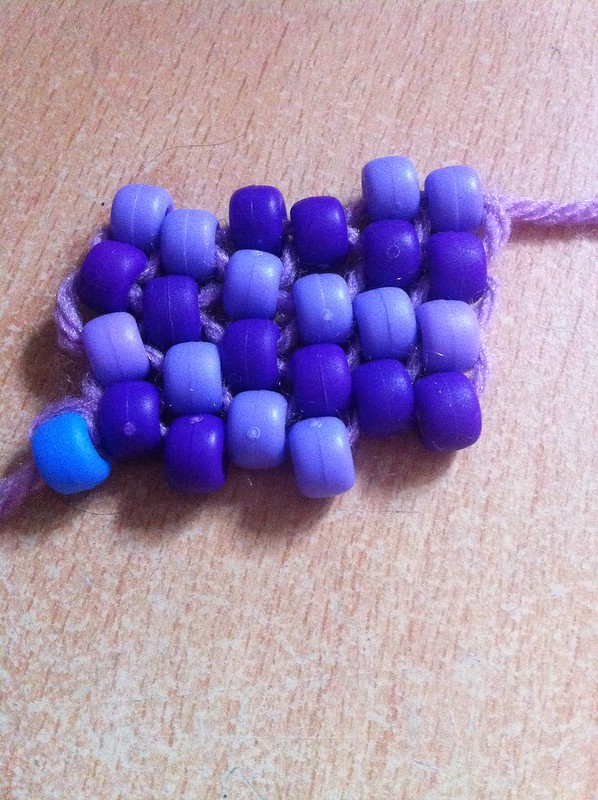 I decided it must be the pony beads, and that I was ready to work with the seed beads you generally use for what I have learned is called “bead weaving”. I dug out my seed beads, and some thread stuff that goes through them. And I just kinda got in a mess. The beads wouldn’t line up right. 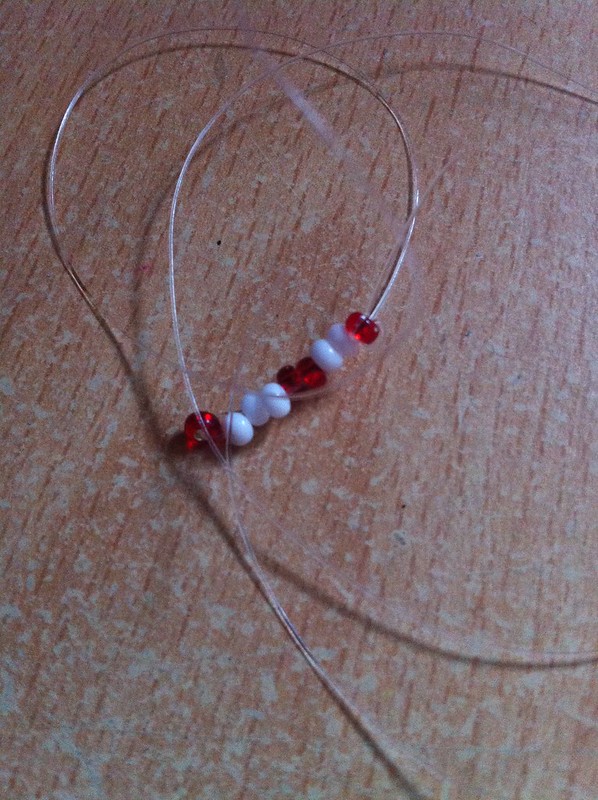 So I figured maybe I’d gone too small. Maybe it’d word a bit better with a 4mm bead? 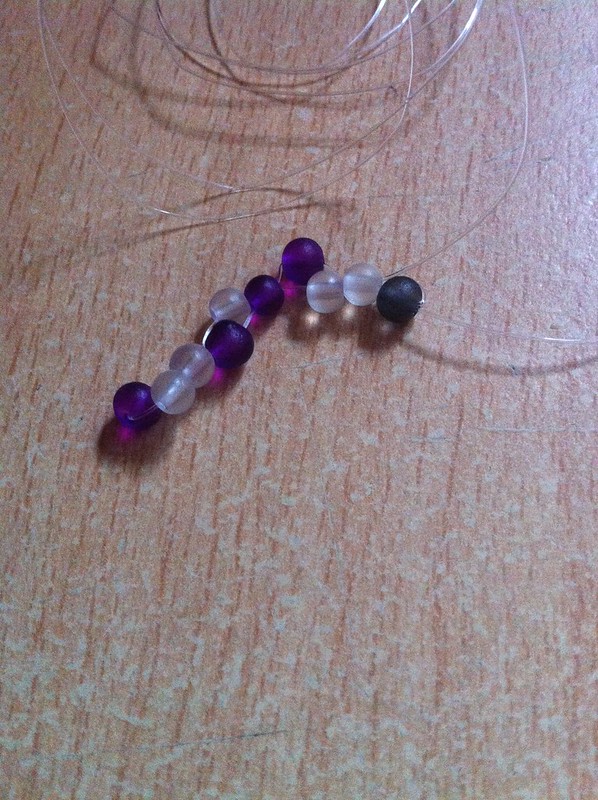 So I went back to pony beads for a bit. I’d found this picture online a while ago… 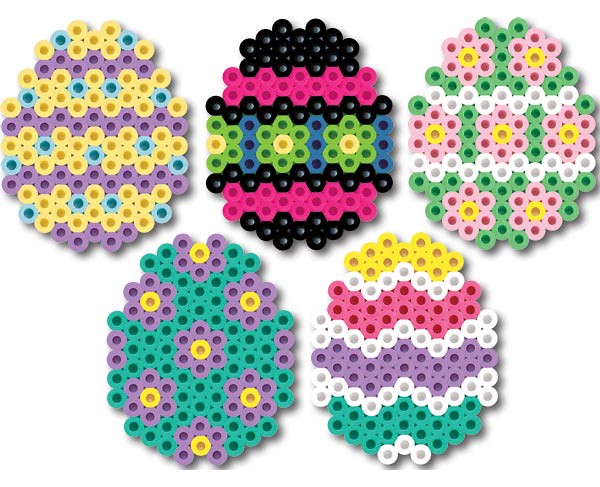 …and I decided I was going to have a go at the one on the bottom left. The local bead store runs a contest that doesn’t seem to get a lot of entrants and the theme for the next one is “easter egg”.

I pinpointed the base rows and threaded them up… 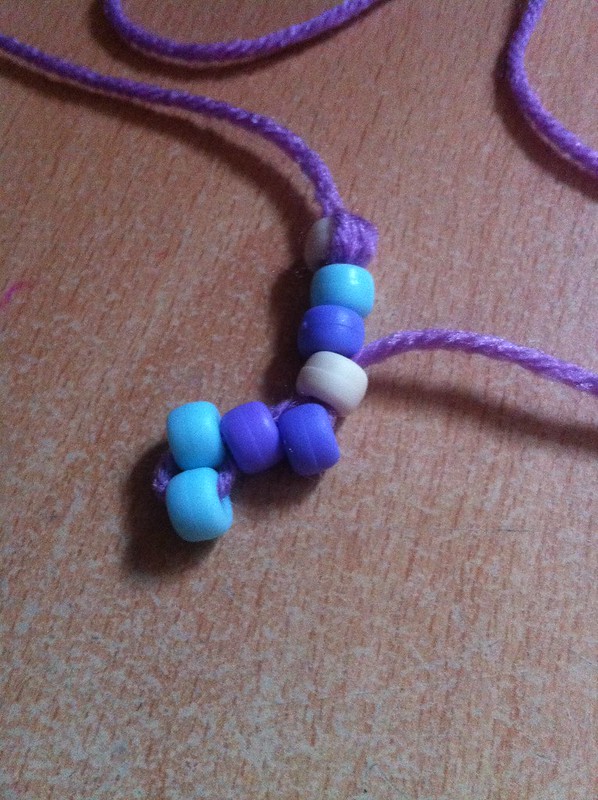 …and then realised that I didn’t actually know how to shape. Right, so I’ll square it off. Give it a background. Simple. I just needed some pattern paper. Fairly sure I wouldn’t be able to draw one out, I did a google image search and came up with this. 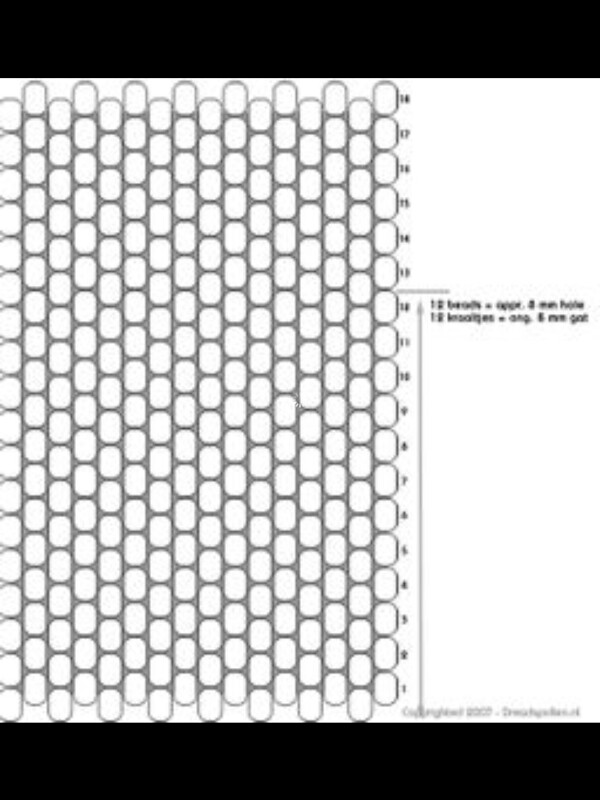 Which I uploaded to the doodle app on my iPad and drew a crude pattern on. 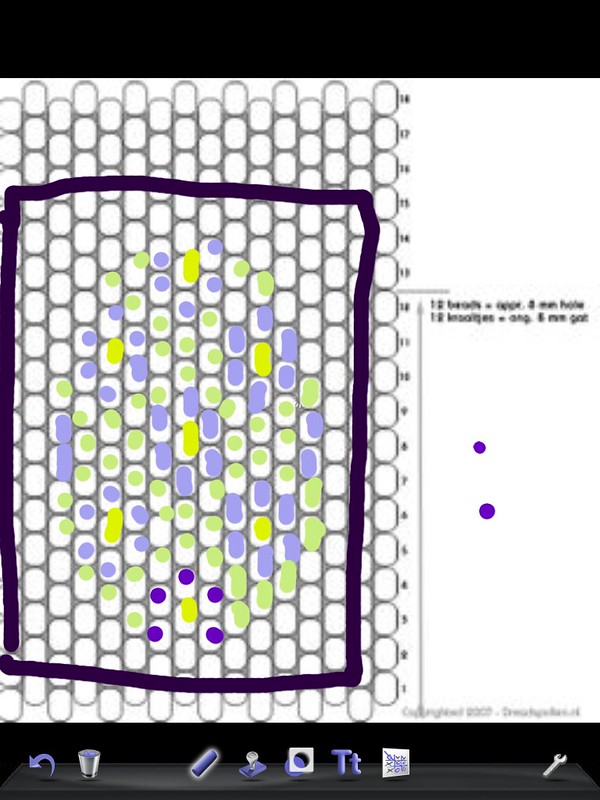 And off I went. Complete with a tip I found for keeping the base steady, I managed to get half of it done before I got tired and went to bed. 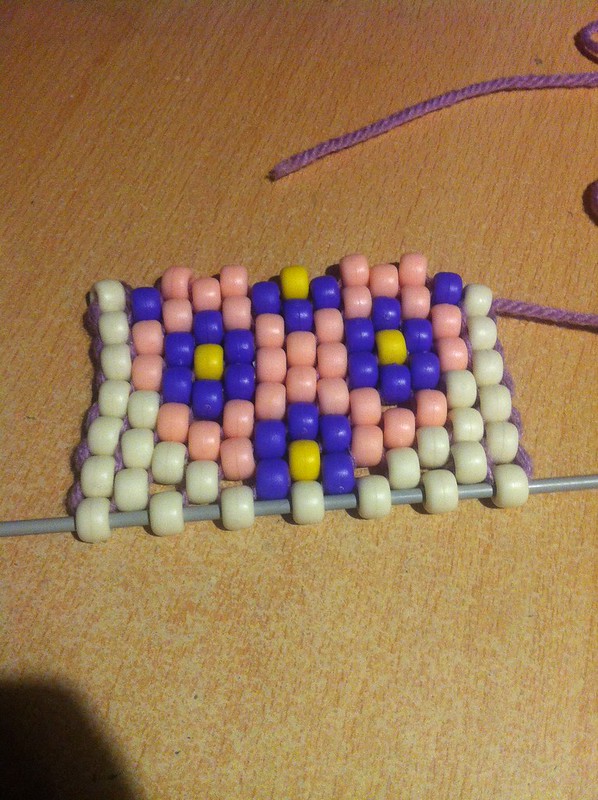 It looks pretty good for a beginner piece 🙂

Before my next session I did a bit more research into it, looking for tips and advice and things. I discovered a few things. For my first attempt at doing it properly, I picked up some wide eyed beading needles. They’re very odd. 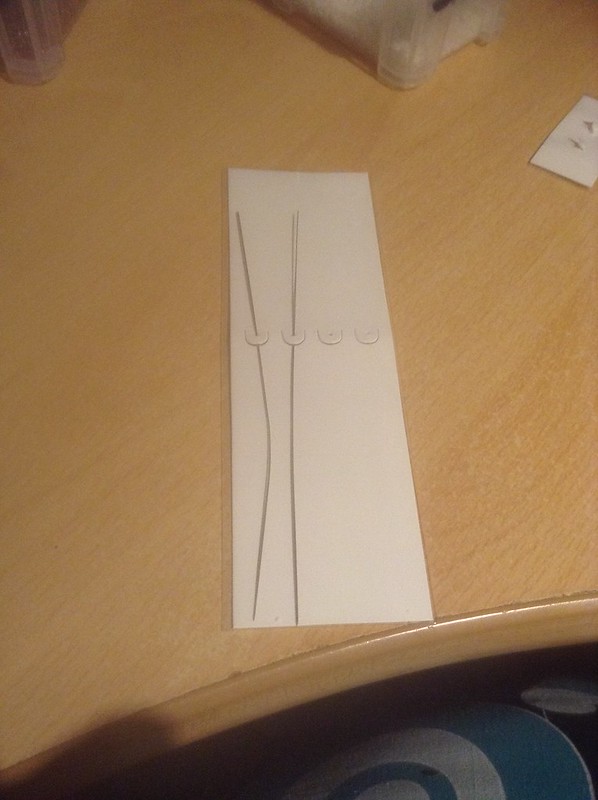 I planned to experiment once I’d finished my egg. Which I did in the next session. 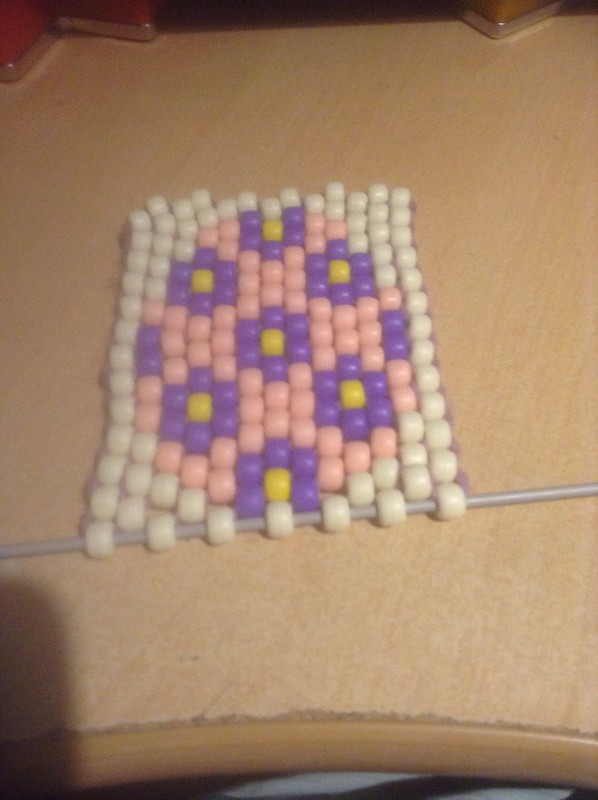 It looked a wee bit wonky, but I hoped that once I took it off the bottom needle it would even out a bit. 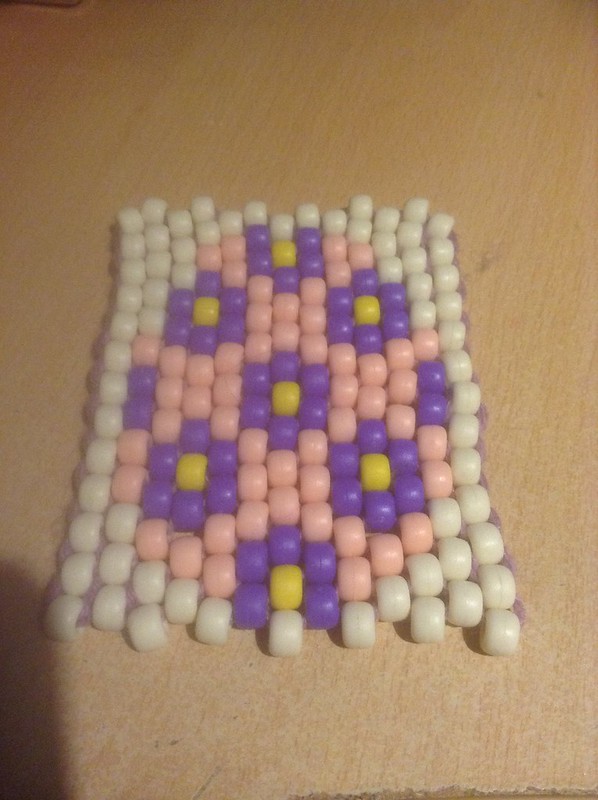 Still a little bit wonky, but for my first piece I’m still chuffed. But I am determined that I will not always be doing bead weaving with pony beads. So… on to the big odd needles.

I got out my seed beeds, thread some wirey stuff through one of the big needles, and had at it. I failed. 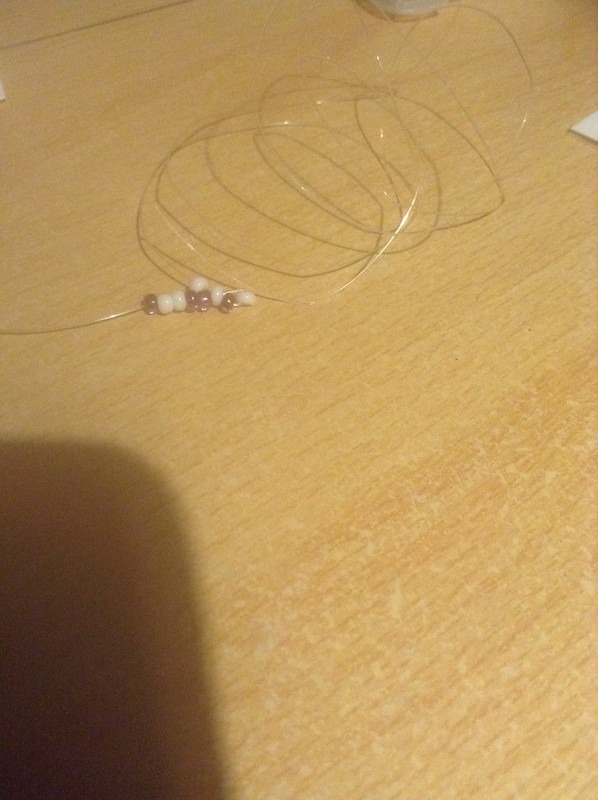 There were a couple of problems. The wirey stuff kept sliding out of the needle, and I couldn’t control it much. I decided to resort to my old favourite. Embroidery floss. Not recommended for beading projects usually I don’t think, but it’s something I can manipulate. So I threaded a big odd needle, and got started.

I had real trouble with the second row. The beads wouldn’t stay in the right configuration. I wished the knitting needle I’d used for the egg piece would fit in my seed beads, before I recalled that the big odd needles would fit. So I threaded one of those through the bottom layer of beads to help stabilise, and I got started again.

Next problem, things weren’t staying still! So I got out the cellotape. 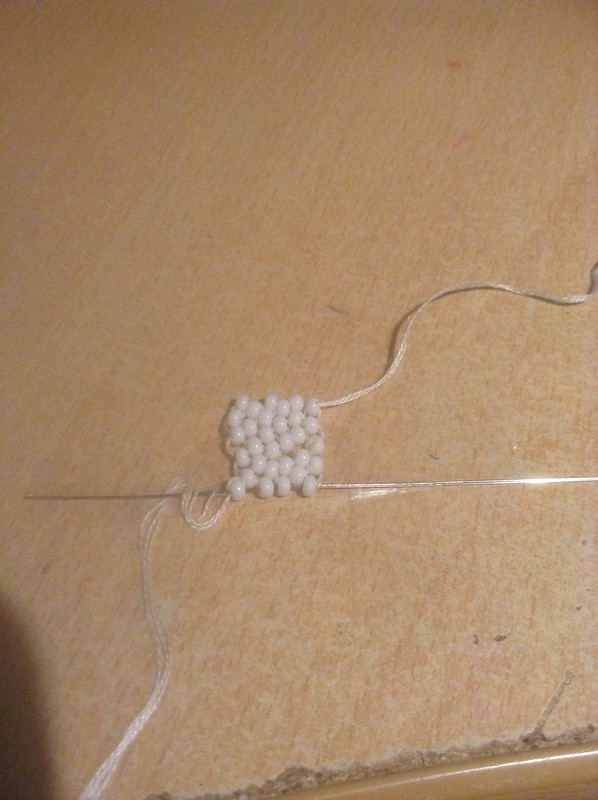 It’s hard to see the cellotape there, but I’ve taped the needle down. At first I just did each end of the needle, but I was still finding the piece sliding around. So I added more tape, right on the sides of the piece, to keep it still.

I worked a few more rows, and found that I was finding it easier. I have the technique down. I KNOW what I’m doing. I’m just struggling to do it with such small beads – although the needle really does help. Especially since it’s so bendy.

I know though, that the way to get better at something is to practice. You can see at the top of the piece in that last picture that it looks a bit better. Practice practice practice.

My tension needs work. The stitch is very loose. But I assume that will come with more practice, just like it did with knitting and crochet. Practice practice practice.

As is typical for me, I found this difficult and put it aside to work on something else for a while… and then completely forgot about it.  I don’t know where it is now. I’ll have to dig it out, or restart it, and have another go.  If I haven’t posted about it in a month or two, chase me up.