Next up in my actually-blogging-the-backlog-of-monthly-challenges series is MerMay 2019.

As I mentioned in my Junicorn post, I decided that since Inktober and March of Robots took me so long to complete, for MerMay I wouldn’t try and do a mermaid every day.  I set myself the goal of at least one a week, aiming for a minimum of 5-10 for the whole month.

First up is the cheat you saw in the March of Robots blog post. 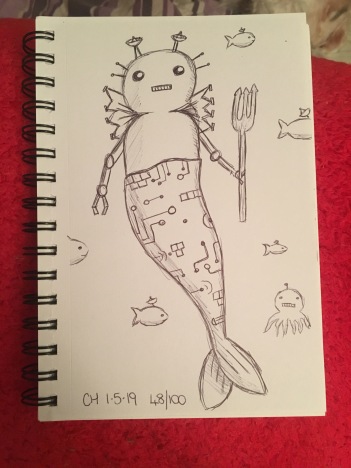 This one is also a cheat I suppose, since it’s only half a mermaid.  It gets two pictures because the bleedthrough on the back just looked so awesome.

The next two are also kind of cheats, in that I didn’t draw them.  They’re from SamBeAwesome‘s Mermaid colouring book.  It’s very good.  You should go get it, either the paperback on Amazon or the ebook on her Gumroad store. 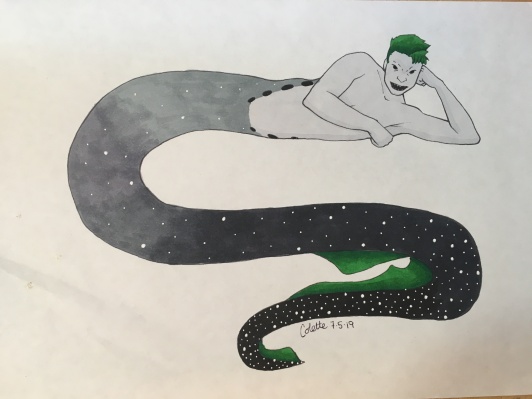 The first one that isn’t a cheat in any way is experimenting with masking fluid for watercolours – there will be a blog post at some point.  Maybe.

Here’s another one that’s due a blog post.  This one was done with the December Copic Colours of the Month. 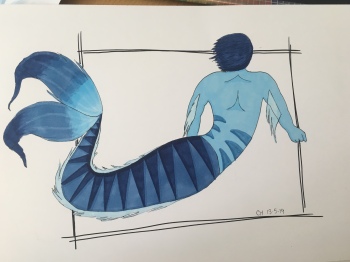 This one was inspired by an instragram post from Mistiqarts where she turned Jack and Sally from Nightmare Before Christmas into mermaids.  I had a go with one of my favourite science fiction characters. 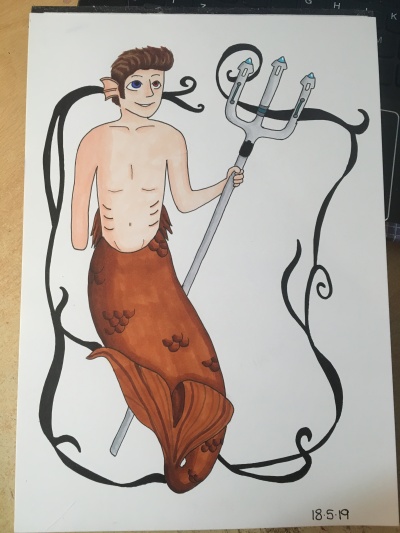 Can you tell who it is?  Let me highlight the clues – the trident is designed to look like a certain tool.  The eyes represent some glasses.  The amputated hand is relevant from one of my favourite episodes.  The tail is in the colours of his favourite coat.  And the hair, at least I think so, is spot on.  Get it yet?  I’ll post the answer at the end of the post.

Then there’s May’s Copic Colours of the Month – also due a blog post.  (I need to create a keyboard shortcut to just paste in “due a blog post”.)

Finally there’s the half.  No, the half is not the tail, it’s half a completed drawing.  I only managed to get the outline done in May.

But I did finish it, and here she is.

So, nine mermaids and a successful (by my terms at least) MerMay.  Maybe next year I won’t wait 3 months to write about it.

Did you guess which science fiction character I mermaidified?  It was the 10th Doctor, as portrayed by David Tennant.  The trident is his sonic screwdriver.  The eyes are the colours of the 3D glasses he wears in Army of Ghosts and Doomsday.  The hand was chopped off in his first episode, The Christmas Invasion, even if it did grow back.  The tail is coloured to look like his brown pinstripe coat, with some attempted pinstripes on the tail fins.  And I really do think I did a good job on his hair.

My nerd is showing again, isn’t it?