During my way-too-regular Pinterest browsing last month I came across this image.

And because I’m me, and I like making lists and doing challenges, I decided I’d have a go.  Obviously I’d be doing 20 though.  20 things to complete before 2020.

I did a bit of research – by which I mean I spent more time on Pinterest browsing for other lists like that one.  I saw some for every year back to 2016.  And they featured a range of goals: personal, business, artistic, health, romantic.  Some were things to begin, some were entire projects, some were things to finish.  It’s a really open challenge – you make it as personal to you as you need it to be. 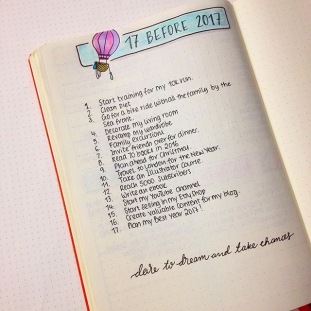 And so, with the end of September looming and just one quarter of the year left, I wrote my 20 Before 20 list. 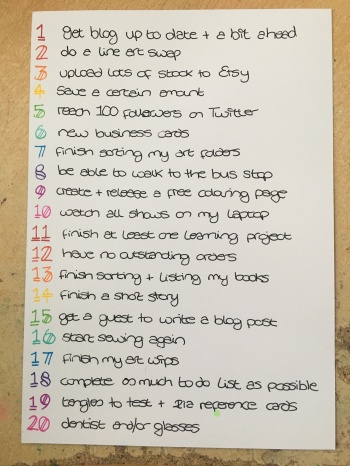 1) Get my blog up to date, with lots of posts scheduled ahead.

This one is kinda self explanatory really.  I have dozens and dozens of blog posts that are ready to be written and posted, and I have new ideas every day.  I need to get on top of it.

This is something I’ve wanted to do since I started drawing.  Until recently though I haven’t considered my art good enough.

3) Upload a bunch of stock to my Etsy store.

I make a lot of stuff.  I have a lot of things I’ve made over the past couple of years – most of them with the intention of adding them to my Etsy store.  But I just haven’t gotten around to listing them.  Partly because I’m horrendous at taking photographs of it all.  I’ve recently met someone who wants to help me with all that though, so hopefully more and more things will be added every week.

4) Save a certain amount.

I’m not very good at saving money.  I’ve been doing a little better recently, thanks to my sister keeping the savings for me.  I have a certain goal in mind that I’d like to have in Bank of Sister by the end of the year.

Currently I have 89 followers.  I’ve been floating in the 80s for a while now and I’d really like to hit a milestone by the end of the year.  I will more than likely hold a contest or a giveaway when I do.

My business cards are a few years old now.  They don’t have all the places that I can be found on them, and they don’t have my Etsy store.  They also don’t have any reference to my art.  So I’m going to do a redesign and order some new cards.

I have pretty purple folders where I started collecting all the art I made.  I put in all the stuff I could find that I’d done before I started doing it “properly”.  For a while I took all my pieces out of sketchbooks and put them in the folder too.  Recently I’ve been keeping things in their books, but I’d like to have little thumbnails in the folders.  I also have a big stack of stuff that needs to be put in there.

8) Be able to walk to the bus stop again.

I’m a very large lady, and I have mobility issues.  I used to be able to get about a little bit, but with a year or so of no money and anxiety about leaving the house, my ability to walk very far has diminished.  I’d like to work towards building that up again.

Ever since I started colouring in books for adults back in 2015 I’ve wanted to create a colouring book.  At the time it was going to be my Zentangle-style doodles.  I have some sketches and starts somewhere.  As ever, I got distracted by other things and never got around to finishing it.  Since I’ve started drawing the desire has reignited.  But again, it’s something I didn’t think I was talented enough to do.

10) Watch all the TV and films on my laptop.

I have a bad habit of collecting a lot of stuff to watch and never actually watching it, even though I do want to.  Over the last few months I’ve reduced a folder of 400+ things to watch (through watching, as well as deciding I didn’t really care all that much about some of it) to about 30.  I’d like to get that clear by the end of the year.

11) Finish at least one of the learning projects I have on the go.

I’m always discovering new things I want to learn to do.  When I do, I spend a good chunk of time researching and collecting tutorials and hints and things to try out.  So in my notebook I have about a dozen pages for learning projects, including watercolours, Copics, digital art, quilling, and lots of others.

12) Have no outstanding orders – including family.

I have a nasty habit of putting orders that my family makes to the back of my priority queue and that really isn’t fair.  I want to make sure that all of orders are complete by the end of the year – apart from a very large massive order that’s going to take me at least six months to do.

13) Finish sorting and listing all my books.

When my Mum downsized six months ago I got some of her furniture, which meant rearranging most of my little home.  So nearly everything I own went into boxes.  When I was unpacking stuff, I decided to update the list that I keep of my books, comics, colouring books, craft books etc.  Unsurprisingly, I got distracted and that list is still sitting waiting for me to finish it.

Long before I was an artist, even before I was a crafter, I was a writer.  I wrote poems and short stories.  I even had some things published – in anthologies and through competitions and things.  But I haven’t really written anything in more than 5 years now.  Writer’s block sucks.  I’d really like to complete a short story.  Either one I have festering on my computer, or a fresh one.  I might even share it when I’m done.

I’ve had a couple of guest posts on my blog before.  Two years ago one of my best friends, Sam from Sam’s Skunkworks, wrote a post about painting miniatures, and then last year the fabulous Del from Del’s Doodles wrote about string pulling art.  I want to invite many more guests to post on my blog, and I’d like to get at least one by the end of the year.

I can use a sewing machine.  90% of the skirts that I wear are made by myself.  I’ve also made some plushies and other things using the sewing machine.  I haven’t touched it in a couple of years though.  It’s another skill/hobby that I want to pick back up.

I’m sure it will come as a massive shock to most of you, but I have a problem with finishing projects.  I get distracted easily by other ideas and projects, so I have a lot of half finished crafts and art that I have every intention of getting back to.  At some point.  There are only a handful of art WIPs (work in progress) and I think it’s feasible to finish them by 2020, as long as I actually get around to doing them.

18) Complete as many urgent and semi-urgent items on my to do list as possible.

I keep lists.  Lots of them.  And I probably add more to my to do lists than I cross off.  What do you think the chances are I can complete this one?

This one deserves a blog post of it’s own – but way back before I could draw I doodled a lot and did Zentangle art.  I have always been a researcher when it comes to new projects so I have hundreds of images on my laptop of patterns that I want to try out.  And I also started a collection of the tangles I like to use most.  A collection that I never finished compiling and that has been sitting in my to do pile for years.