The next post chronologically in my actually-blogging-the-backlog-of-monthly-challenges series is the July Scrawlr Box.  It’s also the last one.  I’m now up to date!  With monthly challenges at least. 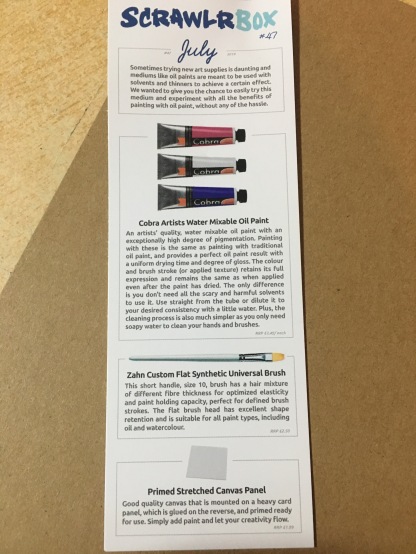 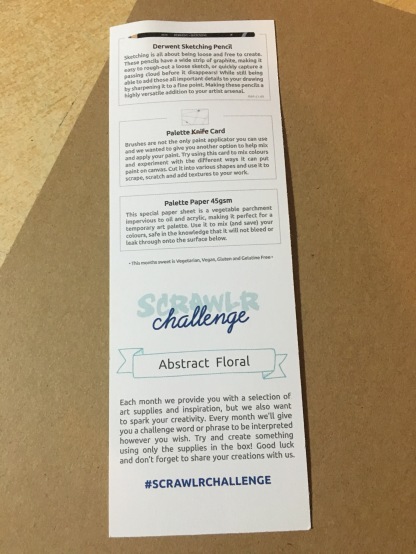 I have never used oil paints, and didn’t really have any desire to do so.  But they were here, and so I would experiment.  And experiment I did – lots of mixing and making pretty shades of purple. 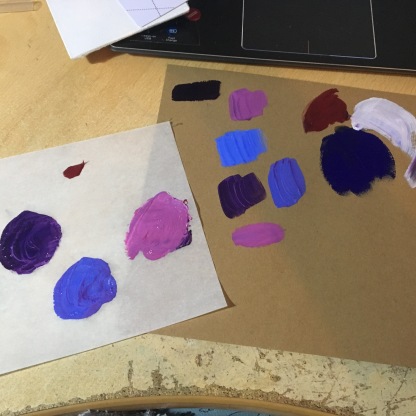 I didn’t want to use the canvas on a medium I wasn’t sure about, so I put that in my drawer of canvases to use at some point and grabbed a random piece of board.  I figured these colours would make a good galaxy.  So I just went at it.  Applied paint, and more paint.  Poked it and brushed it and squished it.  Oil paint certainly has a lot of texture to it.

I ended up with a little too much texture.  It was going to be hard to add stars to this.

So I attempted to flatten it a little, and made a mess.

I decided to wait until it dried before adding stars – that way I could use my Posca pens as well.  Apparently oil paints take a few days to dry.

I did that on 19th August.  I was put off by the medium and didn’t play with the box the day it arrived.  As I write this it is the end of August and it’s still not full dry.  Maybe I had it on there too thick.  Who knows.  It’s not a great galaxy anyway.  I made a much better galaxy when I started to clean off the palette.

I don’t think I’ll be using oil paints again.  I’m a messy artist as it is, and this was a little too much.  I got it everywhere.

But at least I can now say I’ve tried them.  The featured artist certainly did a better job. 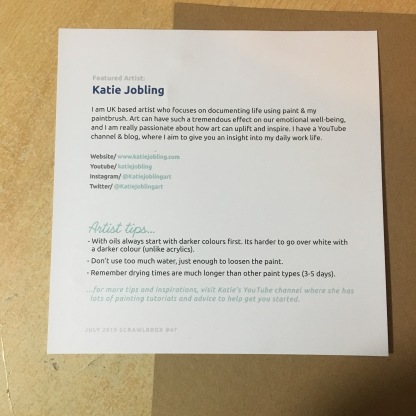 Oh, and because I hadn’t used the pencil I drew a robot.

One thought on “July Scrawlr Box”