So, I’ve done lots of resin experiments.  I’ve purchased a whole bunch of stuff to help.  What do I do now?

First off, I wanted to make swatches of all my pretty colourants. 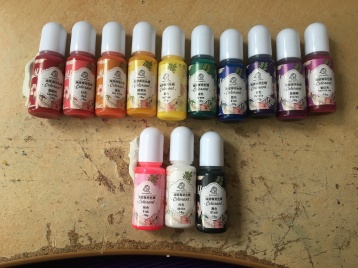 I tried mixing one drop of each with some UV resin but it wasn’t curing under my UV lamp very well.  They were still so sticky.  Why can I not get UV resin to be not sticky?

I switched to two part epoxy resin for the swatches.  It turned out that the plastic cups I’d bought for mixing resin are a little too thin for the heat that two part resin emits.  Note to self – buy different cups.

But I got all the swatches poured and set them somewhere safe to cure without being knocked over by the kitties.

The next day I ended up with beautiful little sample swatches of all my colours.  The advantage to two part resin is that it definitely cures, assuming you’ve mixed it right, and it doesn’t cure sticky.  The disadvantage is the extra hassle in the measuring and mixing, and the waiting time.

After that I went back to the SoCraftastic video that inspired me back in July and I did what she did.  I made a little cat bezel.  I followed her pretty much step for step, except that I didn’t use black.

I cured the cat under a UV lamp for several minutes each side.  The top side would not stop being sticky, so I tried adding a layer of gel nail polish top coat and curing that under the UV lamp.  That dried non-tacky, but it wasn’t entirely smooth – possibly just my application skills.

The reverse of the cat, the bit that had been on the tape, wasn’t sticky at all.  It wasn’t shiny either, but that could be fixed later I think.

I tried taking some tape to a previous sticky-fail, but it didn’t really make a difference.

Right.  So my UV resin pieces will always be sticky.  There are ways to fix that, according to various google searches.  So a couple of tests.  I filled a circle mold with just clear UV resin and cured it under the lamp for about 10 minutes.  It was solid, but it was sticky.

One tip I’d seen online was to use WD40.  It worked, but it removed the shiny.  I tried a buffing block – like the kind you use on nails – but I couldn’t get that to do anything at all really.  I tried sandpaper, which made it nice and smooth, and not tacky.  But it was cloudy. 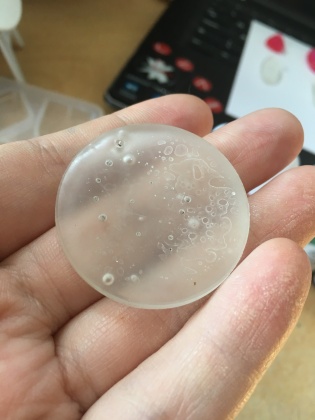 So that’s two research projects to do.  1) how to make it not sticky in the first place.  2) how to restore the shiny after you’ve buffed off the sticky.  I’ll get back to you on those.

I moved on to a surefire way of curing UV resin.  UV.  Like the natural stuff, from the sun.

I filled one of my new bracelet molds with UV resin, added single drops of different colours and mixed them slightly with a cocktail stick.  Then I topped it up, and put it under a semi-clear plastic box on the windowsill for a day to cure under the sun.

After a day it was solid, and the little overspill bit wasn’t sticky.  But I was terrified to unmold it.  I removed the plastic box and put it back in the sun for another day.  Just to be sure.

When I did unmold it though, it came out easily.  And it was so pretty!

It wasn’t sticky either.  The side that had been at the bottom of the mold was nice and smooth and curved.  The topside was a little messy though.  I had a brainwave.  Could I push it into the mold the other way round?  I put it in to test, and it seemed to fit fine.  So I removed the bracelet, put in a ring of resin, put the mold on top of another mold to make the inevitable mess easy to clean up, pressed in the bangle, wiped up the overspill and put it back on the windowsill for another day. 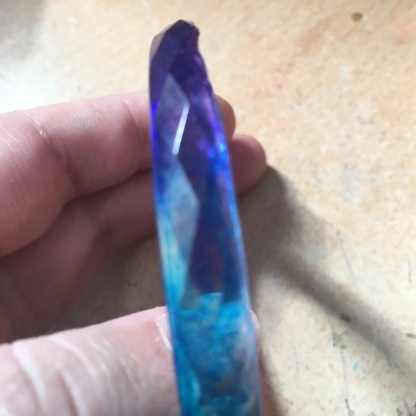 Success!  It came out beautifully, apart from a couple of edges that need tidying up.

Having established that using the great big ball of flaming gas in the sky would actually help the UV resin cure, I wanted another win.  This time I tried embedding a pretty sticker.

I started with a layer of clear resin – blow torched and semi-successfully removed the bubbles.  I cured it under a UV lamp just to make it solid.  It was sticky.  Are you surprised?  I knew enough to seal the sticker in tape, and then the sticky resin actually helped the sticker stay in place.  I added more resin, then one drop of blue colourant and one drop of green colourant.  I can’t mix at all.  Just as well I like the swirly look, isn’t it.  I cured it a little under the lamp, just to stop it spilling as I moved it.  Then I put it on the windowsill under the plastic box.

It cured really well.  The front is nice and shiny.  The back has some issues with smoothness and the whole piece generally is a little bit wonky.  But it’s really pretty. 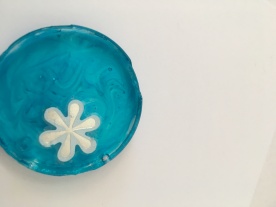 For my final experiment in this session, I wanted to play with rainbows.  Because there wasn’t enough already.  I stuck two different pendants to tape, and I selected a nice big gem mold.

This time I mixed the colour into the resin before I put it in the mold, attempting to get a more solid colour.  I had a nice little routine going.  Mix a little colour, pour some in the rectangle, drip a tiny bit in the pendant with a cocktail stick, and pour any remaining dribbles into a mold with lots of teeny tiny shapes.

I ran out of room in the rectangular pendant, so it didn’t quite get the full rainbow.  And I made a total mess of the spotty pendant.  I had also, you might have noticed, forgotten the big gem.

I still wanted to do it, so I got started, mixing more resin.  I was curing sections at a time under the lamp to solidify some layers a little, at odd angles.  It took a lot of resin, but I finally finished the gem, and I had a tray of lots of little tiny gems.

I tidied up the massive mess I made on my desk and I put everything on the windowsill to cure.  At this point, since I was obviously doing all these projects at the same time, I took some things out of molds and flipped some other bits over.

Then I closed the curtains because the sun is evil.  The gem took a little longer to cure, because it’s a LOT of resin and ended up being not very translucent, which is what UV resin needs to be able to cure. 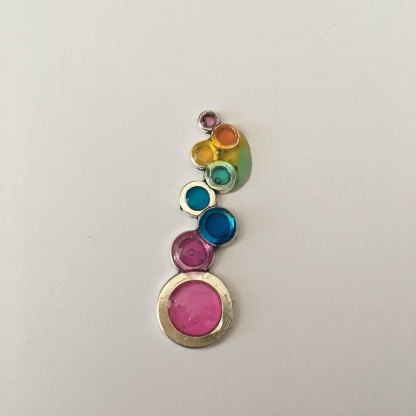 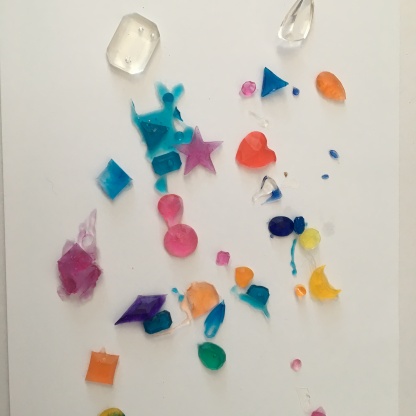 Everything was a little bit messy.  The spotty pendant needs a lot of clean up – possibly a complete redoing.  The gem is much darker than I’d like.  I want to have another go – fully curing each later and using less pigment.  But rainbows!

I had a lot of fun doing all this – despite the frustrations.  I made a total mess, which is my usual state really.  There will be more resin!  I have so many things I want to try, and I’ve already promised you two research projects and two redos in this post alone.

One thought on “Resin Stuffs”