Remember in my rock painting post last week I put some white-painted rocks aside for another project?

Well one of them got turned into this…

I was trying to duplicate something I’d seen on Pinterest.  I might not have used the best shaped rock, but it still looks pretty cute.  At least in my opinion.  Here’s the inspiration image.

We all know I love monsters, and I’m a sucker for googly eyes.  I went back to the poster paint, picking purple this time.  I used a stiff tool to apply the paint and it came out really blobby.  Not so bad for a monster though.  It adds texture.

I had squeezed out quite a bit of purple paint, and there was a lot left.  So I decided to have another go.  Months ago I bought a pack of rocks from Amazon, for future rock painting fun.

These are nice and smooth, and I didn’t do a base coat.  I just tried applying the paint.  It was very blobby again.  I tried smoothing it with an actual brush, but failed.

I knew that applying the paint so thicky was gonna make it really hard to get a smooth look.  But I also knew that it’d take several layers of thin paint, and I’m impatient.  I was curious as to how many layers though.  So I picked out a broken rock to use as a tester. 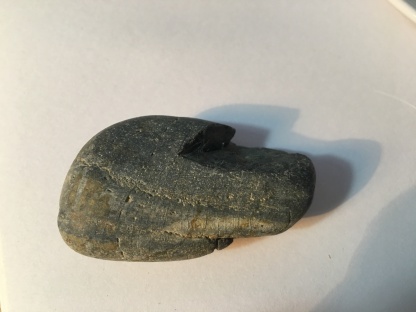 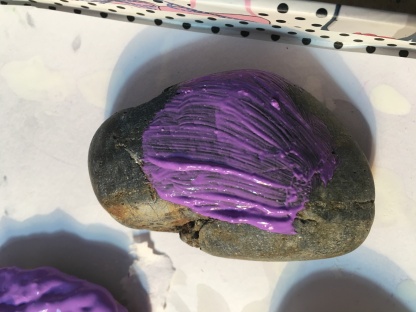 For some reason I don’t have a finished picture, but it took about 4 layers to get a smooth coverage in the end.

Back to the monsters.  They both needed a bit of touching up, and I had to fix the teeth on the first one.  I added a fang to the second monster, lined some mouths, and got out the googly eyes. 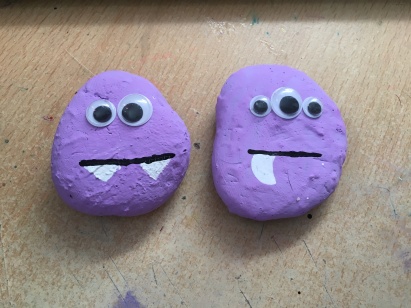 I gave the paint pen a second chance, thinking that maybe using it directly on one of the smooth new rocks would be easier.  It was, but I probably shouldn’t have used the practically dead paint pen. 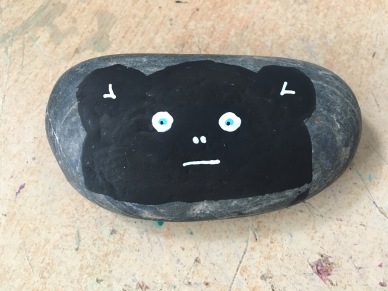 One thought on “13 Days of Halloween – Ghosts & Monsters”