This was a bit of a spontaneous one.  I have a whole list of ideas and plans for this series, which I’ll probably come back to next year because I’ve had a whale of a time doing it and many many more than 13 plans.  But the idea for this one just crept up out of nowhere.

I searched Pinterest for “Halloween origami”.  This was the first thing that popped up.  How could I resist?

The link lead to this page which has both a diagram and a video.  Since I was watching tv with my boyfriend at the time, I decided I’d go with the diagram.

This was a mistake.  I suck at origami diagrams.  Even if I have a key right next to me telling me what all the different arrows mean, I still get confused.  My first attempt looked… weird.  And not just because I didn’t have any black paper. 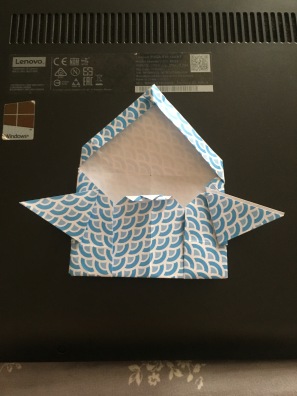 My second attempt wasn’t much better either.  He just didn’t look right.

So I switched to the video, and just about nailed it.

My boyfriend loved it so much he asked if he could scan it and put it on a Hellraiser-style background.  So I passed it over and moved onto the next thing.  Hmm, maybe a bat?

Nope, couldn’t read that diagram either.  I tried reverse image searching it but couldn’t find a source or a video for this pattern.  So I let YouTube pick a different bat pattern for me.

Very cute.  Mine ended up a little bit wonky, as all my creations do, but still cute.

Next up was a pumpkin from this site.  This was so very simple I could just about follow it from the photos and written directions on the site.

By this point Tom (the boyfriend) was building a whole scene.  The scene just needed some ghosts.

My search led me to Paper Kawaii – who is absolutely excellent with her tutorials by the way.  I’ve watched a ton of her videos before and made a load of the pieces she demonstrates.  I tried this ghost first…

…but managed to make a bit of a mess of it. 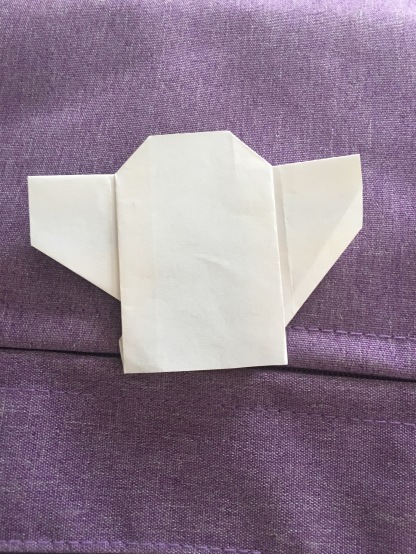 So I moved on to the second video on Paper Kawaii’s ghost tutorial page.

This one came out super cute.

Looking at it now, with the video thumbnail just there too, I think I missed a fold on his head.  Mine is a little more blockheaded.  But he’s still adorable.  And yes, he’s got a stripe of yellow in his tail because the only paper I had with me was a block of rainbow paper.

I wanted more than one ghost in the little scene that Tom and I were building though, and they had to be different.  So I searched for another one and found the most super easy origami pattern ever. 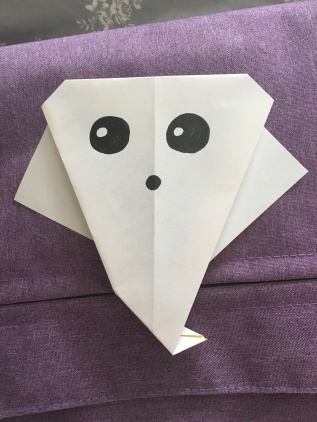 Tom scanned all my little origami spooks into his computer, did some editing and jiggerpokery and we got this.

Isn’t it cool?  And then we got talking about possible changes and we fiddled with it for a few hours until we finally ended up with this awesome masterpiece collaboration. 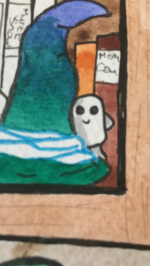 2 thoughts on “13 Days of Halloween – The Grim Reaper”