One of the projects I had planned for the 12 Days of Christmas series that never happened, was to make some snowflakes with my 3D pen.  The tradition it represented was the paper snowflakes I make every year and that I wrote about recently.

I collected a lot of snowflake images from the interwebs, and printed about 60 of them in various sizes.  Then I got out that very large spool of conveniently white filament that I bought.

After a quick test to make sure the filament would come off the paper once set, I completed my first one.  I love how the melted filament looks like icing.

I did a few more, including this one which was so delicate that peeling the paper off was terrifying.

After I’d done a few I set to work trimming off the many many many strings from where I’d stopped extruding the filament at the end of lines. 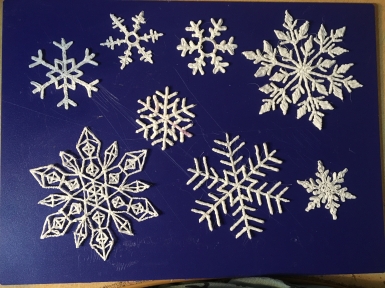 I decided I was going to have another try, attempting to not stop and start.  I did pretty well with the first one, and the only string left at the end was easy to cut off.

I went to add a loop, so I could hang it on my Christmas tree, and realised that drawing one with the pen would probably look better.  So I did another one of these cute little ones.  I forgot the loop.  I remembered it on the third try though.

For the second two, I pressed the string down with my finger as soon as I stopped extruding and that helped minimise the strings.  So I figured I could try that with a more complicated one – stopping at the end of each line to make it neater, and pressing down the string before it solidifies.  It kinda worked.

But it was a lot easier to just do a continuous stream of filament.  So I did some more.

And then some more.  They’re kinda addictive.

I didn’t use all 60 templates, but I think I made enough.  And they’re so pretty!  I do love snowflakes.