I considered a lot of different ideas for Valentines.  I was going to make some stock for my store – but I never got around to that.  I was going to do some Valentines themed crafts, but although I collected the ideas I didn’t do any of them.

Instead, I settled on another line art swap with Nina.  We’ll probably be doing lots of them this year, because they’re so much fun.  Look forward to a St Patricks swap, an Easter swap, a Summer swap, a Tuesday swap.  Any excuse 😀

For Valentines we discussed quite a few ideas.  Design a card?  Use a specific palette?  A prompt list?  Our characters on dates?  Eventually, to make things as super complicated for ourselves as possible, we settled on three different criteria.

1) We would each draw one of the other person’s characters, in a Valentines themed cosplay.  For example, as Cupid, or Aphrodite. With a little bit of a scene/background than we’ve done in the past, since I’m trying to improve in that area.

2) We would include at least five of the prompts found on this list, which was found amongst the millions on Pinterest.

3) When we swap, we’ll have to use the following colour palette – also found amongst the gazillions on Pinterest.  Character’s hair/skin/eye etc are exceptions.

So, what did I draw for Nina? 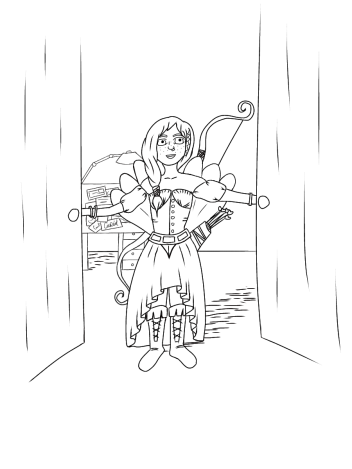 This is her character Addie, dressed as Cupid.  Looking pretty fierce.  The prompts included are: heart, shadow, front door, handwriting and strings. It was sketched traditionally, then scanned in and inked digitally.

She drew me an absolutely awesome picture of my fairy character Effy.

I decided to colour it digitally, because I’m trying to do more of that.  Picking the colours for things was a little frustrating.  More than once I regretted suggesting a palette to stick to.  But I managed in the end – mostly by using different opacities of colours to get different shades.  And I’m really happy with what I ended up with.