I tend to collect ideas for things to draw, that sit lingering on my phone for ages.  Like combining two Disney characters into one character.  Or doing a certain style background.  Or turning a character into a punk/goth.

One of the ideas I’ve had on my phone for a while now is this lady.

When I got my tablet in November last year I naturally downloaded a few games to play on it.  One of those games was Night of the Full Moon by Giant Network.  It’s a role play style game – where you play as Red Riding Hood working your way through the forest looking for Grandmother.  You encounter lots of bad guys and have to select the right cards to battle them and progress.

One of the bad guys that you encounter is the lovely Elf Queen.  All of the art in this game is stunning, but as soon as I saw her, I knew that I wanted to draw her.  She then sat languishing on my phone for months.  Until Faebruary.

There’s a full Faebruary blog post coming in a couple of days, but the upshot is that it’s a month-long art challenge where people draw fairies.  What a perfect excuse to actually get around to drawing her!

First I sketched her out exactly as I saw her.  Exactly-ish. 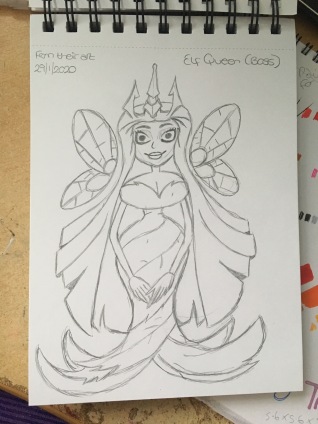 Then I drew her again, but more in my style.  Or whatever burgeoning style I seem to be building.  I sketched and inked her, and before I coloured her in, I sketched out a hint of a background.  I’ve been trying to do more backgrounds with pieces this year.  I wanted to go with an essence of the original image, but not quite, so I made it very simple.

Unfortunately, while I was colouring her in, I kept thinking that there was fluff on the page.

I swiped away imaginary fluff at least ten times before I finished. 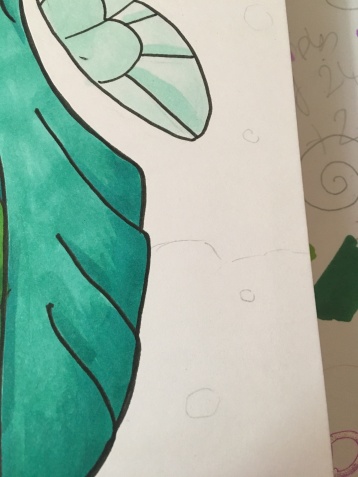 By the time I finished the background though, it was worth it.

It’s a little streaky, but I’m going to pretend that adds to the misty atmosphere.