I have a long list of monthly art challenges in my Notebook and I’m trying to work through them all doing different ones each year.  This year for February I decided to go with FaeBruary.

I tried to do a little research near the end of January, but there was very little to be found.  I did discover that the same challenge is also known by several other names – FaerieFeb, FebruFairy, Fairyary and FeyBruary among many others.

I collected a couple of dozen FaeBruary (et al) prompt lists from Instagram and Pinterest – all with different variations on the theme. Some were types of fairy, some were types of flowers.  Elements, weather types, random words, words that begin with F, different types of fae.  Overall I collect more than 250 prompts.

And then I narrowed it down to a smaller list of ideas that intrigued me.

I’ve done enough of these challenges to know that I don’t want to force myself to do one a day.  I am gonna aim for at least 4 though – I think I did the same thing with MerMay last year.  And the more I do, the better.  Not necessarily picked from the prompt list.  Just fairies.  I like fairies 🙂

The first fairy of the month was actually the January Scribble Into Art challenge which I wrote about a few weeks ago.

Next up was another watercolour fairy, done with the new Arteza watercolour tubes I got for Christmas.

The next one you’ve already seen the Elf Queen fairy from Night of the Full Moon.

This next one was done the day I got a new fountain pen, and was testing out a sample of Diamine Orange ink.

And now we have the first of many many digital fairies.

We’re back to watercolour for this next one – had to do a galaxy fairy.  Obviously.

And now a run of digital fairies.

First is fan art of my friend CrazyComicLady‘s fairy Phallus.  CC is also known as Reality Bunny on Deviant Art where you can read her beautiful mushroom fairies book and learn all about Phallus and his friends.

I wanted to do a famous fairy, so I did the most famous fairy I could think of.  Tink!  In the spirit of full transparency, I did trace the bigger hand, because I suck at hands. 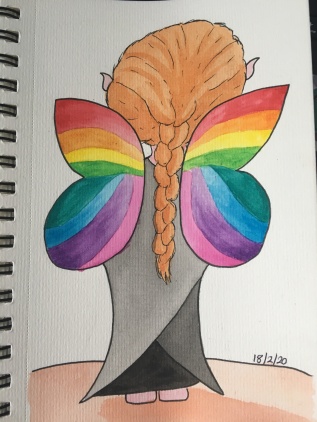 This next one is inspired by a Draw This In Your Style challenge by Sparkiiro on Instagram.  She posted this beautiful character.

I decided she’d look adorable with wings.  And I was kinda right.  She would’ve look adorable if I didn’t end up making her somehow derpy.

Sparkiiro loved it by the way.

Next up is a sketch that you’ll learn about in the February Scrawlr Box post coming soon. 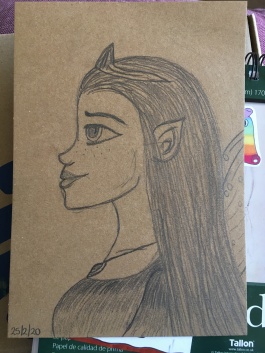 Finally, another digital fairy.  This guy took a lot of work.  I tried inking several times and wasn’t happy with it, so I ended up carving down the sketch.  Then the background was a bit of fun and games.  But I’m super happy with how he turned out.  (There may or may not be a bunch of tracing with this one too.)

And here’s a bonus fairy.  On the last Sunday of every month, SamBeAwesome does a subscriber raffle on her Twitch stream.  If you win the raffle, she’ll do a drawing of your character – or whatever you want (within reason) I think.  I won the February raffle – by being one of the only two subscribers in attendance.  And the other subscriber. the lovely KadrinChan let me have it.  So, because it was FaeBruary, I asked Sam to draw my fairy character Effy.  This is what Effy looks like… 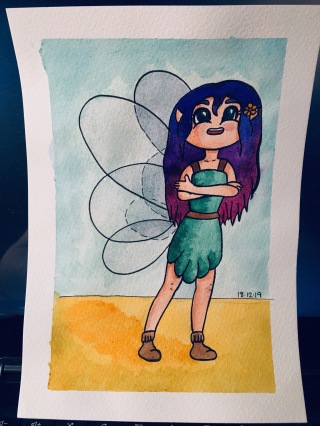 …and this is how Sam portrayed her.  How beautiful is she?  Thank you Sam 🙂 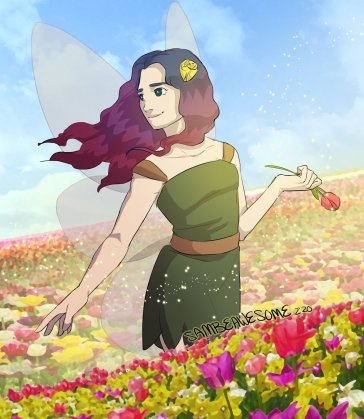