I’ve been in the mood to make elasticated bracelets recently.  Especially since I figured out how to make the elastic actually knot.

I use this stuff…

…which is kind of slippery.  Knots don’t stay knotted.  A quick Google search led me to lots of useful tips: pre-stretch the elastic before you start, tie the knot while slightly stretched, and use a surgeon’s knot.

I’m currently finding it a little difficult to get the knot done, but I know that’ll get easier with practice.  The extra loop makes the knot stick.  And so far the bracelets I’ve made have not fallen apart, so that has to be good.

My first batch was two custom bracelets for an order on my Etsy store.

And then of course I had to make myself a rainbow version.

I wanted to go back to one of my favourite styles of bracelet.  I’ve made a few wrap bracelets this way.  Like these:

I worked out the ratio needed for the size of bead and the size of jump ring.  So I made a test with these bigger beads. 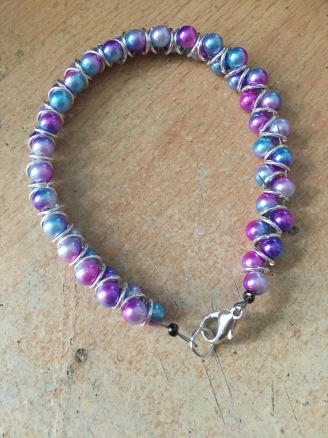 Then I moved on to a rainbow version.  (Are you surprised?)

I did this twice with the rainbow version.  But I went back each time and fixed it.  By the time I was getting to the closure, I was very frustrated.  And then the wire broke.

It got put away in the box of shame for a few days, then eventually I went back and did it with elastic.  Now it is pretty and safe.

Yes, they are different beads.  The glass-looking ones have very thin holes which I couldn’t push the elastic through unaided.  I had one beading needle at the time…

… and taking it off one strand of elastic and putting it on the other many times over seemed a wee bit excessive.

So I bought some more beading needles. 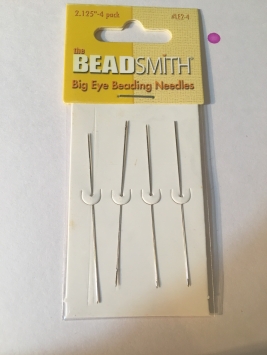 Then I made the same bracelet with the glass-looking beads.

And while it is beautiful, the elasticated jump ring bracelets don’t look quite right.  It’s probably the elastic.  So I decided to try a different medium.  I started with Kumihimo thread.  I set some up with a button for a toggle, picked out the beads… and the thread was too thick.

At the time I couldn’t be bothered to go root through the rest of my beads supply for something that would fit, so I made some more elastic bracelets with the glass-looking beads.

I did a couple of rainbow ones… 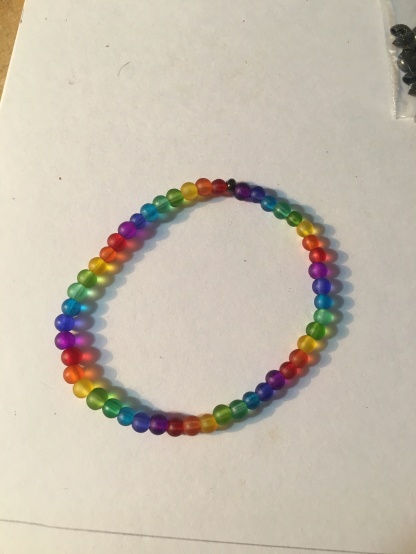 …then I decided to branch out.  I tried to do a black and white version but I didn’t quite have enough.

So I added a colour to the pattern. 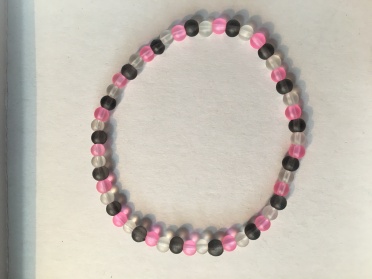 Eventually I collected all my boxes of beads from the other room.  Well, some of them.  There’s a lot of them.  The shiny beads, and the glass beads, were both too small for the kumihimo thread.  The kumihimo thread was obviously the wrong material.  I can’t remember what I used before, but going through my supplies I settled on a couple of options.  First up, this stuff.

It’s Tiger Tail; a kind of wire, kind of plastic.  I’ve had a set in all colours for as long as I can remember.  They have no label.  I doubt they were branded.  But bending them around a bit doesn’t seem to break the wire, so it’s worth a go.

I got quite a way through this one before I needed to take a break – I’m doing a proper wrap bracelet so it’s much longer.

While I took a break from that one I decided that I have too many random sets of beads that don’t really go with anything else.  Like these.

Which might explain why I have about seventeen of these boxes on my shelf. 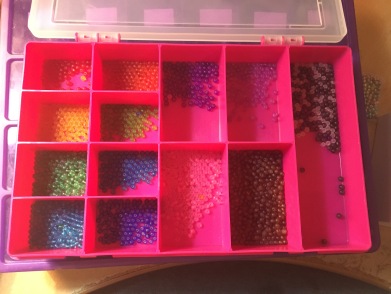 So I started using them all up making elasticated bracelets.  Until I ran out of elastic. I had made the decision to use up all my random beads.  So I bought more elastic.  And I kept going.

I even dug out the beading board I’ve had for years but barely used, to help me lay out my name.  You know, in case I forget.

Whilst making all these I found out a way to make tying that surgeon’s knot easier.  It helps to have the bracelet taut.  If it’s slightly loose, you can get beads caught up in the knot.  Unfortunately I can’t use my own wrist, or I’d struggle to tie the knot at all.  And with a lack of other people here for me to use, I searched my desk for suitable things.

Mug = too thick – the elastic was too stretched out.  Small box = same thing.  Pencil case = not thick enough.

Eventually I found something that was just the right size.

It is, or will one day be, an amigurumi unicorn head.  It worked so well that I’m making plans to crochet a beast or something specifically to help me tie elastic bracelets.

Eventually I only had a handful of random beads left.  Not enough of one or the other to make a bracelet really.  So I moved on to earrings, using that handy beading board again.

I rearranged all my beads, to use up the now-empty spaces and created some empty boxes.  Then I took them back into my craft storage space (my bedroom), where I remembered that I’d only bought half of my bead boxes into the work space (my lounge) in the first place.  So at some point there will probably be another bracelet binge, to use up all the other random beads.