I’ve never drawn an Anthro or furry character, and so I was intrigued.  First of all, what the heck are they?

Research led me to conclude that an anthro is basically an anthropomorphic character.  When you take an animal and apply human attributes to it.

I had drawn characters that weren’t human necessarily.  My OC Katerina has animal-ish eyes and ears.  She could be classed as Anthro I suppose. But I added “draw an anthro” to my to do list.

Following on from her addiction, Sam then got herself an adoptable.

It's DA BOI! ❤ My new baby. Playing around with a headshot and giving him a scarf. Thanks to those who came out to today's stream x3 https://t.co/rajcJiaaEX#furryart #anthro #drawing #digitalart pic.twitter.com/pD9kg5OCZb

Another thing I didn’t really know about.  What the heck is an adoptable?

Apparently they’re character designs created by an artist who then transfers possession and rights of that design to someone else, usually for money.

New goal: get an adoptable.  They vary in price a lot, and are usually relatively expensive for me.  But with some searching I came across Ilyakomo on Instagram (she has a new profile now as V1vadacious) who had some very cute, very simplified bases available to adopt.  And thus I ended up owning this.

Which sat in my to do folder for months.  In March this year I finally got around to starting work on him.  I sketched out what was basically the original shape, because wolf/dog bodies were not something I’d ever done before. 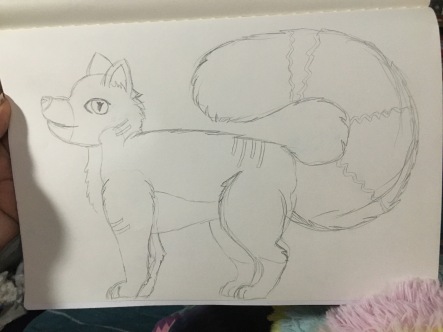 And then I got to swatching.

Once I’d settled on my colours, I coloured him in.  Except that I wasn’t entirely happy, so I made some notes. 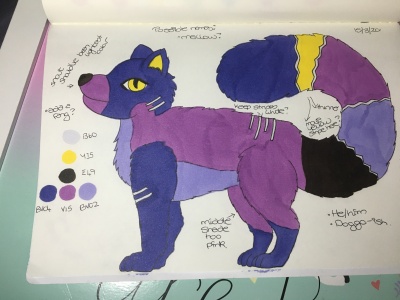 I did some research into wolf/dog body shapes, and did some studies – as seen here. And for the second attempt I tried a different pose. 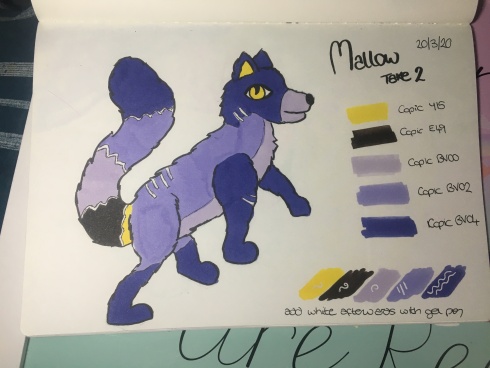 I am much happier with these colours – and have determined that these are his official colours.  I deliberately only used my Copics and Winsor & Newton Pro/Brushmarkers when swatching, because I wanted colours I would be able to easily replace when they ran out.

My mind settled on his name as being Mallow – which I think is a little funny, because that’s the name of the marker in the first attempt that I didn’t carry through.

So far he’s just feral. He doesn’t have an anthro form yet, but he’s a work in progress.