Shortly after I got my adorable little die cutting machine last year, SeaLemon posted a new book binding tutorial on her YouTube page.

I wanted to combine making it with using the die cut machine, and I had a perfect idea.  I was going to use a glitter washi tape rainbow card I’d made while messing about with tape ages ago, and a unicorn die cutter.  I’d cut a unicorn shape out of a piece of pretty card and use that over the washi to create a rainbow washi unicorn silhouette.

However I encountered a few problems.  I used A5 sketchbook paper for the inside of the book, and it was too big for my little machine. 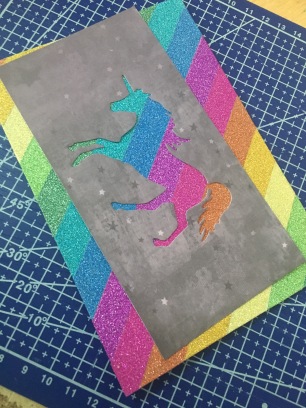 Right.  Well, what about a rainbow cover, with just a unicorn silhouette then?  That’ll work. I’ll use the cutout from the first attempt.

I folded the signature and trimmed the edges so it was flush.  I copied the nice neat corner folding from SeaLemon’s video.

And then the glue stick tore off the unicorn’s tail. 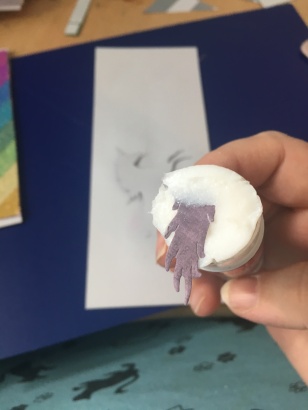 I tried again – using the same paper as the cover so it would match.  And when I flipped it to glue to the back I must have put it down on some glue somewhere, because I managed to tear the colour from his nose and lose his back hoof. 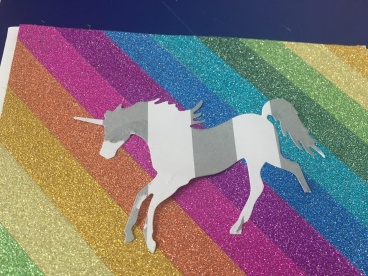 Right – just rainbow it is then.

I used duct tape for the binding tape, and then quite frankly it got put in my To Do pile and forgotten about for months.

When I finally got around to finishing it, the rubber band I’d used to hold it together had dented the duct tape spine a little.

But I carried on regardless.  I used my awl to poke out holes for the stitching.

I grabbed the cord I keep with my bookbinding pieces and pulled some through the wax.

I threaded my bookbinding needle, started stitching, and encountered the next problem.  My curved needle was the wrong shape and/or too big. 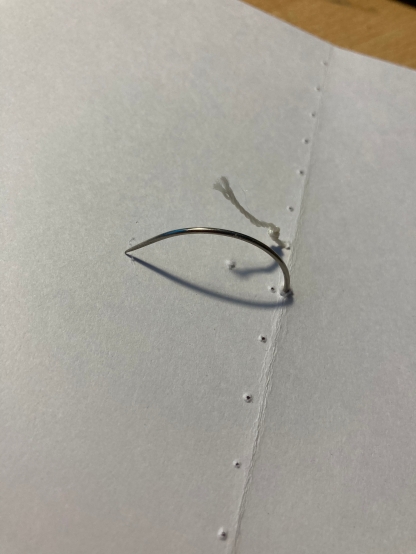 So I switched to a straight needle and stitched the notebook.  I did a saddle stitch, because by this point I had completely forgotten that the whole point of this project was to do that pretty chain stitch. 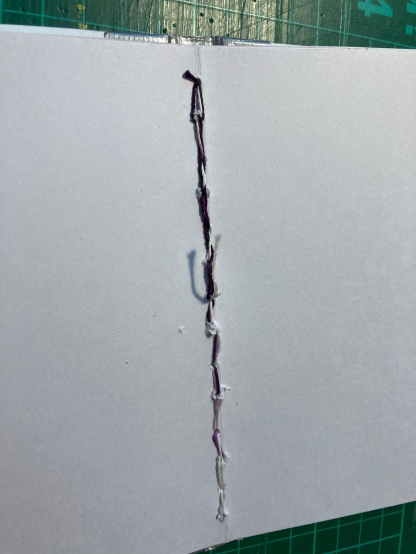 I will do that chain stitch.  As well as the other very pretty stitch that SeaLemon just released a tutorial for.  At some point.