As well as selling my goodies online, I like to attend craft fairs and summer fetes and things.  I’ve only done four so far, and I’m learning new things each time.

Last year I was invited by Ellie at Ultimate Gift Packs to have a stall at the Christmas Fair she was running at Weyhill Fairground Craft and Design Centre.  Cayden and I had a great time, and I look forward to attending again this year.  Weyhill Fairground is a beautiful little place, and we plan to get back at some point this year for a proper look around.

While we were there I wandered around the stalls quite a bit, like I always do.  I spent a wee bit of money at some beautiful stalls – I’ll blog about those later.  As I said, I learn new things at every fair.  I get new ideas for stock, and for display, and just general things I’d never thought of.  One idea that really struck me was having a cute way to display my business cards.

So far I’ve just had a little pile of them on the table, but the STARescue Small Animal Rescue Centre stall had a fantabulous idea!  A book hedgehog.  For some silly reason I didn’t take a picture at the time, but there are tons of them online if you search.  Like this one by Clara Maffel on Flickr… 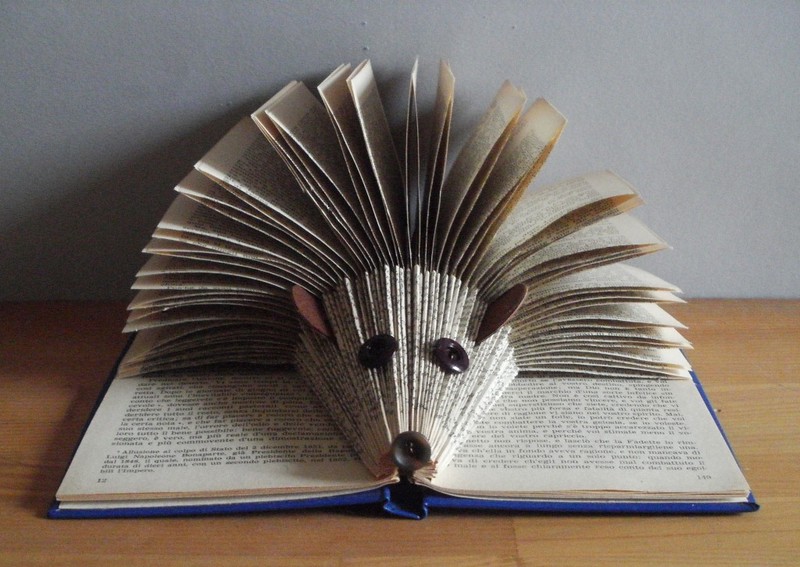 I also found this adorable Harry Potter one from Pinterest.

That one leads to a dead Etsy link, but there are lots of others on there if you want to buy one.  This cute little bespectacled one…

…has sold, but the seller, Maplewood Book Art, has a LOT of really cute folded book art that is just so inspiring.

I could bombard you with picture of hedgehogs all day, but I’ll restrain myself.  Just this last one, which you can buy at Creation Crafts and Gifts – to show you how to display business cards in one.

Folded books and altered books are things I’d like to try, but I have a very long list of things I want to try and haven’t quite got around to yet.  But when I saw a video pop up on my YouTube subscription feed for a place card holder, I thought that’d be perfect to hold my business cards.

I used a 12×12″ sheet of craft card rather than origami paper, and by the end some of the folds were quite difficult.  But for a first attempt I think it looks pretty good.

I will be making some more for practice.  Maybe I’ll use a thinner paper next time.  Keep your eyes peeled for updates, and hopefully a book hedgehog of my very own!

Note: I’m submitting this blog post to Skip To My Lou‘s Made By You Monday.  It’s my first time, and I hope it’s okay 🙂  Let me know what you think.

One of the things I like to do is go onto eBay and look for auctions that are ending soon. When you filter to things from the outside of the UK especially, with free postage, you can find things going for pennies.

Recently I’ve been collecting a lot of cabochons and settings using this method. A cabochon is a glass dome piece, like this..

They come in all kinds of shapes and sizes, as do the settings.

Once I received my bits and pieces it was time to get experimenting. I tried four different methods for decorating the back of the cabochons. There are some that I bought from eBay with pictures already on them.

(I got these from seller Pandahall1972 who has a jewellery store and sells all kinds of goodies for excellent prices.)

The bottom right is a picture I drew myself, the bottom left is cut from a magazine, and the top right is origami paper.  I modpodged the paper onto the flat side of my cabochons, and this seemed to work best.  The top left cabochon I actually decorated with layers of nail polish.

The modpodging paper worked brilliantly, although the hand drawn piece bled which I should have foreseen.

But overall I was happy with my cabochons.  Next stage – putting them in the settings.  This is where the real trial and error started.

First thing I learned?  Don’t just dump a load of modpodge in the setting and press the cabochon in.

Seriously, you don’t need even half as much as that.

In fact, just scrape a tiny teeny bit onto the back of the cabochon.

I tried other glues too.  Superglue…

..and hot glue.  The hot glue dries VERY quickly, so you have to be fast or your cabochon won’t sit properly in the setting.

Once everything dried, it became clear which method I’d be continuing with.

Superglue – no.  Definitely not.

Hot glue worked, but left the cabochons feeling not-quite-steady in the setting.  Lots of modpodge was acceptable, but you have to peel off all the excess which can leave your setting with marks.

You don’t need a lot of modpodge.  The light scrape worked fine – and I banged it around a bit to make sure the cabochon was secure.  With a successful method in the bag, I made up a few more.

And then I high-tailed it to eBay.  Now I’ve got all sorts of different shapes and sizes waiting to be made up into beautiful pendants.

The show is located in the exhibition centre in Farnborough, which is conveniently where Cayden lives.  So it’s a fairly easy one for us to get to.  We went to it last year, but neither of us were feeling particularly well.  We had a brilliant time though and especially enjoyed the beading workshop:

We decided that we definitely needed to go again, and I’m so glad we did 🙂

Last year we made a note to bring more money.  This year we’ve made notes to bring even more money, as well as a shopping trolley!  There was a lot of shopping done – look for a Craft Haul blog post soon to find in detail what I bought – and lots of new ideas for crafts.

We did the workshop first – a wonderful bottle making workshop run by a company called Powertex.

There’ll be a blog post all about that workshop soon I hope.

And then we did the zig zagging bit.  We managed to not spend money!  Which is a major success for me, if not for Cayden.  We have learned that we need to make a note of which stands we want to revisit though, because when we did get around to shopping, we’d lost at least one beading stand.

It’s easy to lose… there are a lot of stands.

Lots of very nice things to look at.  Some stands that are a little confusing.  We’re still not sure how some of them fit the theme of the show – a stall selling hair clips, a handbag stall and a whisky stall for example.  But there were more than enough crafty goodies for us to look at, so we really didn’t mind.  And we definitely didn’t mind the inclusion of a fudge stand.

Lunch was delicious – bbq pulled pork with some fried potato bits.  A little over priced, but that wasn’t the fault of the exhibition runners.  It was the catering company they’d brought in.  No matter.  Next year we’ll remember to bring even more money for food.

The shopping was delightful!  So many goodies, at such good prices.  We’d both gone in with a shopping list and I think we managed to get a good chunk of those lists completed.  And then of course there were all the spur-of-the-moment I-must-have-it purchases.  More of those for me than for Cayden.  He has more restraint than I do.

We saw dozens of people with shopping trolleys, and I have to say they were absolutely genius!  I bought quite a few books of craft paper, and within just a few stands my shoulders were hurting from carting things around.  Definitely need a shopping trolley next year.

As I said, I will be doing a craft haul blog post some time soon, but here’s a sneak peak of my purchases:

Cayden and I had a great time, and we’ll definitely be going back next year 🙂

When an inkling of an idea inserts itself into your consciousness, sometimes it comes fully formed: I want to make a pompom garland.

In this case the next step is clear.  There are questions to be answered.  What method of making pompoms shall I use?  What size?  What colour?  How am I going to string them?  Will I add ribbons?  Bells?

Sometimes your inkling is less formed.  You may wake up one morning with the word “pompoms” emblazoned across your brain, with no clue where to go next.

Whether your inkling is a word or an idea, the next step is common to most crafters.  Research.  And this can come in many forms.  You could root through your own craft supplies.  You could take a stroll to your local craft store.  There are a multitude of books and magazines available for nearly all crafting endeavours.  But, if you’re anything like me, your first port of call will be this wonderful world wide web.

I LOVE the internet.  It is responsible for 99.99% of my hobbies, and for the many scrapbooks of ideas I have floating around waiting for me to work on.  And my first port of call when I have an inkling of an idea is Pinterest.

Pinterest is a wonderfully ingenious, horribly addictive website.  Be warned – it is a bit of a rabbit hole.  Click one link too many and you’ll find yourself emerging 3 days later with a to do list a mile long.

I personally don’t pin things, but millions of other people do.  So when you search for something you’re presented with so many options you’ll have your idea fleshed out in no time.  Just searching “pompoms” presented a plethora of ideas.

And this idea for making pompoms in bulk, from Flax & Twine.  Pinned by 43 people.

Then there’s these adorable little sheep, by Mum in the Madhouse.  Pinned by 28 people.

And these cute little Valentines bugs, from the Hobbycraft blog.  Pinned by 89 people.

And that’s just a sample.  I now have a nice long list of things I want to try.  Keep your eyes peeled for the results.

The first post of a blog should be momentous, and interesting enough that anyone who reads it will want to come back for more.  This, however, has caused me no end of worry about what to post.

I have all these plans and ideas.  But, as you may soon come to learn, I quite often have lots of plans and ideas for a venture.  More often than not they all get bottle-necked in my brain to the point that I have no idea where to begin.

So, instead of attempting to wow my new readers, I’m taking a different approach.  I will delight and interest and inspire and astonish you with posts to come, but for now my aim has been to intrigue you enough to return another day.