Disclaimer: This post is a repost from my old blog, which was more personal and less crafty. I don’t use that blog anymore, but thought I’d share some of the craft-related posts from there. This one was from June 2015.

After the semi-success of my first craft fayre, I went looking for other places to sell my wares.  I came up with a nice list of places, but decided to settle only on one to start off with.  I picked the summer fete at Four Lanes School in Chineham.

And I’d learned a lot of lessons from the craft fayre. I narrowed down the stock that would work well for the venue, and didn’t take absolutely everything I’ve made. And I pre-prepped. I did the price labels, I pre-attached the magnets to the trays, I pre-strung the earrings on the display. I made sure I had a proper tool kit with everything I might need. And as a result, I was ready 30 minutes into the 2 hour set up time. 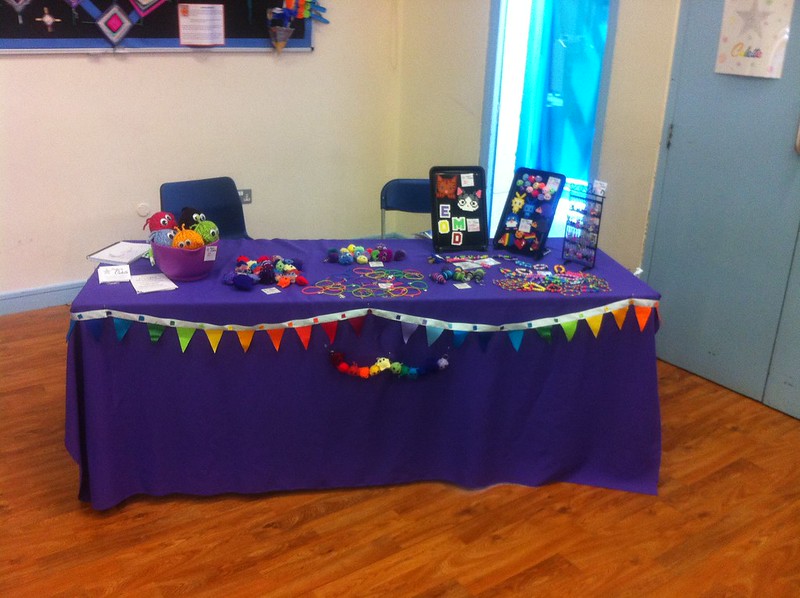 But if you know me, you know that I’d much rather be way way way too early for something than even a second late. So I happily sat there with my crochet and watching everyone else set up.

I had a prime location, right next to a very large cake stall. And we were inside, which is just as well as it was absolutely scorching and horrible outside.

The fete opened at 2pm, and by 2.15 our room was still empty. I had bought and eaten some cakes, and knew that everyone would be caught up in all the stuff going on outside, and they’d get to us eventually.

By 2.45 though, I’d only had one or two lookers. I had a smile plastered on my face, but I was starting to fall apart in my head. Seconds after that, I had my first sale. A little boy bought one of my not-so-mini aliens.

A few minutes after that I sold another not-so-mini alien, and then all of a sudden I was having a rush of sales.  There was a queue!  A queue!!

And that triggered a great day 🙂  I made back the cost of the table, plus a LOT more.  I was coming down with a cold and not feeling all that great, but the shock and joy managed to keep me going 🙂

I will definitely be going back next year, and I’m hoping to be at their Christmas fete too 🙂