When I started drawing, I knew that at some point I was going to want to draw digitally.  I had a random Wacom tablet, but I just could not get to grips with the drawing in one place and looking in another.

So when I was looking for a new laptop about a year ago, I decided to go with one that had a touch screen that I could use as a graphics tablet.  I ended up with a Lenovo Yoga, which lets me fold the screen right back and turn the device into a large tablet.

This helped, a lot.  And I’ve done some art that I’m really proud of on it.  Like this guy. 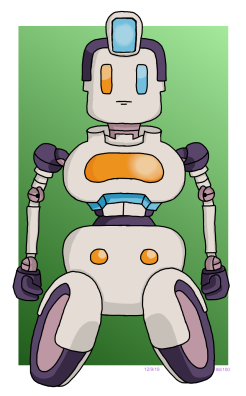 But there have been some issues with it.  It’s very big, and since it’s not actually a graphics tablet, when I rest my hand on the screen it registers.  It’s also the type of screen that works with my finger, so the styluses I can use with it are great big chunky tips, which is a little difficult to get used to.

In the later months of 2019 I started investigating the next option.  I knew that I wanted something with a screen.  I wanted something I could draw on independently, rather than having it attached to the computer.  I can’t afford an iPad.   That doesn’t leave a lot of options.

I still don’t quite know all the terminology but I wanted something with the opposite of the screen on my Yoga.  Something that needs a stylus to register input.  Unfortunately all these things are expensive.

In November I found an article somewhere telling me that a Bluetooth stylus would basically perform that function.  When connected to a normal tablet it would only register input made with the stylus.  And so I got myself a relatively cheap tablet, and a pen.

It turns out the pen I got – that was about £30 – wasn’t actually a Bluetooth one.  It was essentially a very expensive version of the chunky styluses I had already been using.  So that went back.

The tablet, however, stayed.  It’s smaller than my Yoga, and so easier to manage.  I’ve managed to do some good things with it, at least in my humble opinion.

And I’m regularly doing these little tutorial things I find on Pinterest as practice.

I still don’t know if a Bluetooth stylus would have worked.  I’ve given up the Googling.  I don’t understand a lot of it, and it just gets frurstating that I can’t afford proper equipment.

One day I’d like a proper graphics tablet.  Maybe even an iPad, but that’s not happening any time soon.  For now I’ll just have to keep practicing with what I have.